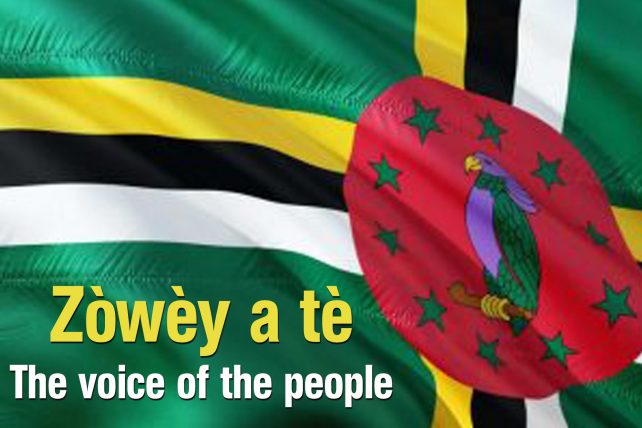 Dominica mourns the passing of veteran broadcaster Felix Henderson as the country now grapples with the reality that an individual whom we have all come to love and respect, is no longer with us.

Henderson’s contribution to the promotion, acceptance and preservation of the Creole language in Dominica and his critical role in the development of the orthography (spelling system) for the Creole spoken by the people of the Caribbean region, will forever be etched in the annals of this country’s Creole history.

The broadcaster extraordinaire will also be remembered for his unique, humorous  brand of advertising for many business places in Dominica.

In one way or another, Henderson has impacted many, and DNO’s Zòwèy a tè hit the streets to garner the thoughts of Dominicans on this Creole icon.

Alex Bruno: After working with someone  for over 20 years, I believe it can be accepted that  you would know that person especially if you had a very good relationship with that individual as I did with Felix. Speaking about Felix  in the past is not even a thing I can even fathom, but alas I have to. Felix and I worked  very closely on a number of creative and key initiatives at  DBS radio, one of those is  the reading competition which later expanded but it was Felix’s idea because he had a passion for reading and  books and creativity. But it was Felix, Wadix and I when the reading contest started and everything  got started around that. On several occasions I filled in for him on Espewyans Kweyol and I would have gone  out with him in the field and we worked on  documentaries’ together because at one point in time Felix was in the creative department. He had a passion creole and he was one who pushed for us to speak the language and if Felix were to have left a legacy behind it would be  that he created an awareness as someone who understood the  need for having creole into our loves in a particular way. Seeing the hindrances to the creole language he  created an industry around creole by  creating some characters like niniput and certain phrases  like naftanoon to cause the creole to be palatable on radio at a time when this was not welcomed as such. So that is his legacy. Giving the creole a humors cushion in our lives in a way that I think we will  never forget.

Audrey : “Growing up, creole was something which was not encouraged among children in the household and only the adults used it to pound beff as we say. It was only when I got older whilst listening to Felix on DBS and his many ads that I developed a love for the language and learnt it myself. I am now trying my best to teach my children and I will try even harder with the death of Felix. He was truly a creole icon among many other things.”

Jeffrey“We have lost a true gem and son of the soil. It is only my wish that through his death his strive to have the creaole language more widely spoken and incorporated in school and parliament etc. will be implemented. During the creole season there should be a national holiday in his honour.”

Ettiene:“I am so happy that Felix had a chance to receive his flowers whilst he was alive.This man, beyond all of his wisdom, experience and achievements he was still down to earth and was able to reach and connect and relate to almost anyone. He will certainly be missed.”

Lennisha:“I did not know him personally but listening to him on the radio and his commercials as well as his drive to promote Dominica and especially the creole language I developed a love for him. We have lost one of our greatest.”

Arlington:“There are so many things which can be said about Felix but I think he will be most remembered  for the way he made so many laugh. His absence will certainly leave a void in the lives of many Dominicans. I admired the way served and lived his life for the Lord. I can well imagine him in heaven making the angels laugh.”

Reggie: “Felix was a friend of mine and even through everything he was going through he was still hopeful and positive and offered words of encouragement. This man was truly a hero. He would give selflessly to anyone and I don’t think there is a person in Dominica who loved our culture more than he did. Dominica has lost one of its finest.”

Camela: “Even if you didn’t know him personally the name Felix Henderson is one I think every Dominican has heard and will remember.  This one day on a bus I heard Felix voice on the radio doing an ad for Maxroy and I just burst into laughter, I knew immediately that I wanted him to do an advertisement for my business. I got in contact with him and on the spot he produced my ad to perfection. He will surely be missed.”

Osborne:“I remember growing up and listening to Mr. Henderson. There wasn’t a time that I would tune in and listen and at the end not have a smile on my face. Listening to him you forgot about all the worries of the day. He had the ability to make you smile even through pain. He made a great contribution to the media world here in Dominica and I and many others will certainly miss those witty commercials of his. Rest in Eternal Peace Mr. Henderson.”

Lifford: “A true icon, a creole king and one whose legacy should leave on so future generations can know what he did. It was only fitting that he got to see his last  independence season which he so dearly loved.”

Clemencia: “Among the many things that I will miss about Felix is his warm greeting, naftanoon. He has a contagious smile and he was a real icon and a true Dominican.”

Petra: “Felix is an irreplaceable icon and though his death was untimely we should certainly carry on his legacy and fulfill his wish of seeing the creole language advanced in Dominica.  Felix was a treasure to the nature isle.”

Randy: “I think the government should do something to honour this man. His contributions to Dominica can never ever be matched and there will be no other like him. Dominica has produced many pioneers but Felix is among the top. Not only did he contribute to Dominica culturally but his humanitarian work was incredible. This man had a heart of gold.”

Cheryl:”This is not the news we wanted but we can’t question God. Felix was instrumental in the preservation of the creole language in Dominica and he  impacted so many over the years. His legacy will live on. His family should take comfort in knowing he was loved by many”

Denis: “ I grew up listening to this great man on DBS Radio with his great voice and his mastery in the Creole Language, and I know for sure there will never  be another to march his ability. I loved his programmes and his voice so much,and I know he inspired others also, which means his work was not in vain.”

Annard: “I remember my years working with him at Astaphans and this man was truly a God sent and an amazing person all together. He would motivate me, give me advice and even helped me out on many occasions. I love the fact that Dominican assisted as much as possible during his sickness and I know for a fact that Felix was grateful for every contribution big or small.”

Joan: “I always thought niniput was a real person, that’s the amount of effort Felix put in  his work to bring to we the people. Our commercials will never sound the same again but we honour this great man for all he has done for us and Dominica.”

Simon: “Felix did a lot for this country and I think the reading competition and many other programmes and activities should be renamed in his honour. He spent his entire life promoting creole so with his death I hope that something is done to say that his lifelong goals for the creole language did not go in vain.”

Odette: “There are days when I would be having a bad day and it was the naftanoon which lifted my spirit and after years of listening to him on the radio it was only a few years ago I met him in person and we chatted like we were friends for years. He was truly down to earth and we can’t find many people like him in this world today.”