Effective September 16, 2021, employees of Rubis West Indies Limited Dominica will be laid off for a period of three months as the distribution company of petroleum and aviation fuels, LPG and lubricants, suspend the sale of fuel in Dominica and await word from the Government which could affect the company’s future in Dominica.

Dominica News Online (DNO) has received a copy of a letter sent to members of staff dated August 16, 2021, informing them of the company’s decision to temporarily withdraw its services, pointing to a loss of earnings for nearly five years.

“You were previously advised by Rubis Country Representative in Dominica that Rubis West Indies Limited Dominica has incurred significant financial losses every year since 2016 and continuing in 2021,” the letter, signed by the Human Resource Manager, stated.

According to the company, the current regulated fuel prices in Dominica mandated by the Ministry of Trade requires that Rubis sells fuel below its acquisition cost, which the company says results in a loss of money for every gallon of fuel sold.

“You were also earlier informed that this situation is unsustainable and that as a result, Rubis would likely suspend fuel sale in Dominica to stop the economic loss while continuing to negotiate with the Government for improved regulation for the sale of its fuel product in Dominica. This course of action you were informed, would have a negative impact on jobs,” the letter stated.

Employees who received the letter were further told, “this letter serves to inform you that for the reason(s) given above, Rubis West Indies Limited has taken a decision to suspend fuel sale in Dominica for a period of 3 months, commencing the 16th day of September 2021 (suspension period).”

Pursuant to section 13 of the Protection of Employment Act chapter 89:02 of the laws of the Commonwealth of Dominica, the company has decided to lay off employees for a period of 6-weeks in the first instance commencing on September 16, or at a later date immediately following the expiration of any accrued vacation leave.

“We will inform you in a subsequent letter of the vacation leave to which you are entitled, if any, the date on which said vacation leave will end and the dates on which your 6 weeks’ lay off period will commence and end,” the letter, copied to the National Workers Union, read.

“During your period of lay off you are not to report to work and will receive no pay. However, you remain an employee of Rubis West Indies limited unless you determine otherwise. We understand that lay-off will be a difficult event for you but the company has no reasonable alternative in the circumstances,” Rubis stated.

The letter ended by stating that the company hopes for a  successful resolution with the Government of Dominica and will update employees on the situation and their employment status.

DNO has contacted the Barbados-headquartered management team of Rubis West Indies who indicated that they would get back to us. We have also attempted, without success so far, to reach the Minister for Trade, Ian Douglas for comment.

The company, which operates in 12 other Caribbean islands, in 2011, acquired the assets of Texaco in Dominica which, at the time, was owned and operated by Chevron in the Eastern Caribbean.

Below is a copy of the letter sent to Rubis employees. 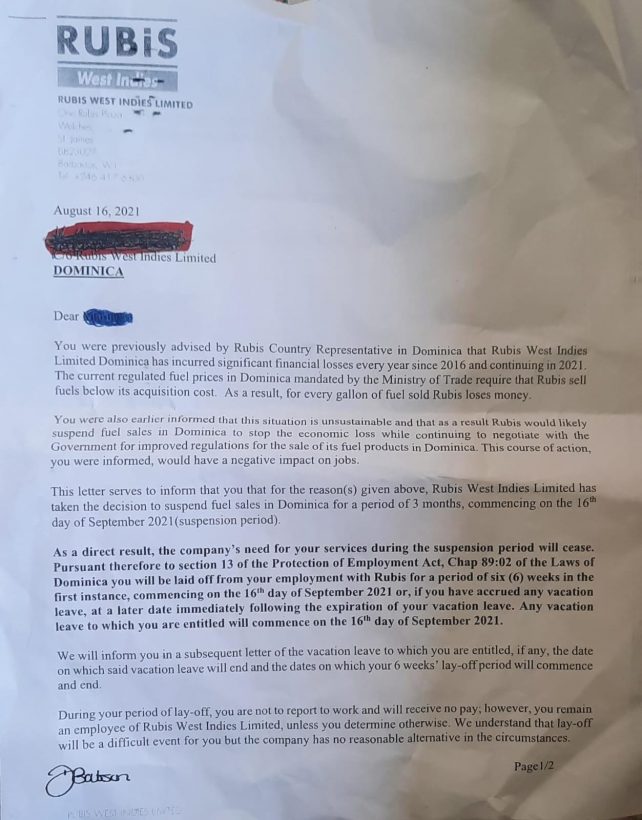