The World Creole Music Festival’s schedule of dates has been changed for the first time in years.

Rather than having the Festival fall on the weekend before Independence Day, the “3 nights of pulsating rythmns” will be held one week earlier (from October 23rd to 25th 2020) .

Marva Williams Events Coordinator at the Dominica Festivals Committee, speaking at a press conference today when asked if the change of date will affect the number of visitors who come for the event she indicated that she does not believe that will be the case.

Williams pointed out that the logistics of the event were also examined as well as the whole independence calendar. “I believe the decision was made at a government level and our aim was just to put the information out early enough…”

This was in order to allow those who were just waiting for that information to book their travel arrangements.

In a press release yesterday ( Tuesday, January 28th ) the Discover Dominica Authority (DDA) indicated that the festival will be held one week earlier to accommodate preparations for celebrating the country’s 42nd anniversary of Independence on November 3rd, 2020. The following excerpt from the release explains briefly how the Festival fits into the schedule of events around the Independence season and what to expect culturally from the show:

The WCMF which is part of the wider celebrations for Dominica’s annual independence anniversary, and is preceded by a variety of cultural events, competitions, and fringe musical events, has become well known for attracting some of the region’s major acts in the creole musical genres like Cadence-lypso and Bouyon from Dominica, Zouk from the French Antilles, Compas from Haiti, as well as other genres with Caribbean and African roots, like Reggae and Dancehall from Jamaica, Soca, and Calypso from Trinidad and other Caribbean islands and Afro-beat from the African continent. 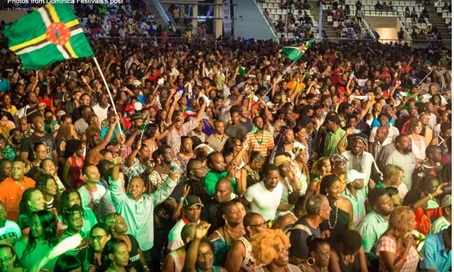 Barring  2014 and other extreme conditions such as 2017 when the festival was cancelled due to Hurricane Maria or in 2010 when night two (October 30th) was effectively postponed to the afternoon of the following day due to Tropical Storm Tomas, this is the first significant alteration in time or date of the WCMF.